Share All sharing options for: Interview with Jason Grilli 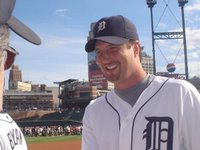 Two weeks ago, I contacted Rockies pitcher Jason Grilli about a potential interview. Not just a week later did he respond to my email and agreed to do the interview. The interview went very smoothly, and it was nice to see how flexible he was leading up to the interview in working with me while my power was down. Grilli and I also have some new features we plan to work on together for the site, which I am very excited about. Grilli is currently in the Tigers bullpen with a 5-3 W-L record and a 5.37 ERA with 49 K. I want to thank him again for doing this interview with me, I really appreciate it.

ELI: How did you feel being drafted by the Yankees? What were your reasons for not signing?

JASON: Growing up in New York and having relatives in Long Island, I was a big Yankee fan. I love New York and was thrilled to be drafted there, but I wanted to go to college and I was nervous about living the life of a professional baseball player at just seventeen. This was in 1994 when the strike happened, so negotiations were sort of up in the air. So I stuck with my education and hoped that I could stay healthy and improve on my game. I felt that I could improve greatly and ultimately get my game to a level where I could be drafted in a higher round than in high school, as well as, make some money after getting some education in as well at Seton Hall University.

ELI: What parts of your game were most improved at Seton Hall?

JASON: My velocity was improved a lot. You know, I was 6'3'' and 160 pounds so once I got some more strength I really had a chance to develop my curveball and changeup. From there, I was getting some attention from scouts who had watched me in high school and with the talent on my team; I was getting attention off of them too. I got to play with Matt Morris who was a junior when I was a freshman. He taught me a lot about what he was going through, and I watched him and what it took so that I could be in the same position my junior year.

ELI: Just two years after being drafted, you were traded in a rather big deal. What were your thoughts on that?

JASON: My initial feelings were upset and shocked. The Giants were the team that drafted me, and being a high pick you get every opportunity, but now I was with a team that I was unfamiliar with and all those 'extras' were taken away. But from the trade I learned that baseball is a business and a lot of things are out of your control. I was excited though about going back to the East Coast because I wasn't really a West Coast guy. And I would also get to see my family a lot more because they are in New York. All in all it was good, because I felt I was in a place of opportunity and live close to my home in Orlando. I also got to make my big league debut with the Marlins against the Atlanta Braves.

ELI: In 2005 you were a free agent, what were the steps in signing with the Tigers? Were any other teams interested?

JASON: Yeah, I was talking with the Tigers, Twins, and Pirates and when it came down to the decision that had to be made, I wrote out a list of all the positives and negatives for each team and checked out their rosters to see where I thought the team was heading, and where or if I could contribute. The reason I chose the Tigers was because their positives strongly outweighed any other teams. I also saw that I could fit in on their roster and contribute.

ELI: You clinched the championship game for the Toledo Mud Hens, do you remember a lot from that game?

JASON: I think what I remember most from that game is that there was a two hour rain delay and how we were sort of all on edge being up 2-0 on the Indianapolis Indians. But we knew we were going to win because we were so pumped up. There were so many winners and great guys on that team too. They just played to win and knew how to do it in style

ELI: What was it like pitching in the WBC? What did you learn from that experience?

JASON: Oh, it was a thrill. It was playing playoff baseball during the spring. You know, Spring Training isn't as intense of atmosphere as the WBC was. Especially being its inaugural season, everyone is so intense and the spotlight is on and every game you put on the line, I learned a lot from it and had the opportunity to play with some other great Italian players throughout the major leagues.

ELI: You grew up around the Tigers seeing your Dad pitch there; do you feel more comfortable pitching there because it is your hometown?

JASON: It is honor to be a Tiger, returning home to where I was born. I wasn't raised here, and I don't remember much of when he pitched, but getting the opportunity to where his number, 49, and be with the Tigers, it is like I'm reliving his career. If I had to compare it to something, I would compare it to playing catch with your old man. I'm carrying on his legacy, and I like to think about it a lot, gives me a sense of pride every time I put on the jersey.

ELI: What was it like watching Verlander's no-hitter, when did you realize he had one?

JASON: Oh, he had dominating stuff and had it the whole game. He needed and had every bit of everything to get it to. Neifi [Perez] turned a great double play and Mags [Ordonez] made a couple great catches out there. I noticed he had it early, but I shook it off because of superstition. You know how it is, you say something and then it happens, and you get blamed for it all. So I kept my mouth shut, but I kept my eye out for it.

JASON: No, there really isn't a meeting before the game. Occasionally, [Jim] Leyland will call a meeting if he feels necessary. He'll sometimes chew us out after a game if we deserve it, but I think what you and a lot of people are wondering is what he does to get us going. I think the main reason for our magic is that right from the beginning we bought into everything he had to say. He came in with so much experience, and he was so emotional, you got the feeling that he cared about you. In turn, you cared about him and because we all respected him so much, no one ever wanted to let him down. You know, we're playing with a leader, and everybody knows it.

ELI: How'd you get the nickname Cheese Man?

JASON: [Laughs] I got it from Gene Lemont. My father's nickname was the Big Cheese and Gene gave me Cheese Man. I love the nickname because, again, it is like reliving my father's career.

ELI: Can you tell me a little bit about your business venture, Perfect Pitch Marketing?

JASON: I love to learn about business and studied Marketing in college. I incorporated my love for baseball into the name of my business, Perfect Pitch Marketing. I figured with all my free time, I can also utilize my persistent character to develop some great ideas around a great product and service. I also love to network and meet other successful people in my travels. My business mainly focuses on providing VoIP phone service with video capabilities that is becoming more widely recognized and used today. Yeah it is something I do to distract me from baseball that I have a lot of interest in. It gives people and businesses alike a chance to connect through their Video phone or computer anywhere in the world. You know, you get to see them from long distances. The cost is very low, and the video quality is better than web cams, because there are no glitches or delays. It would great for people who travel constantly or sports athletes who are always traveling. I love it because I see my wife and family often when I am on the road.

ELI: Besides baseball, do you follow any other sports?

JASON: I love college basketball and the NFL. I love Sunday's at home, getting to watch my Giants in High Def. [Laughs]

ELI: What do you think about Michael Vick and everything that is happening with him?

JASON: I think he made a bad choice, and when you are in the spotlight all the time it can be magnified even worse. He is paying some tough consequences, but I hope that he is not judged to harshly by everyone. I am sure he is a great guy, he just made a bad choice and the law is coming down on him. You know, everyone loves drama, especially when it involves celebrities. I just feel bad for him and his family, because he is under a lot of scrutiny right now.

ELI: Which team has the best bullpen setup?

JASON: It has to be Detroit's. We have an indoor facility to get either Air Conditioning or Heat, depending on the weather. And there is a bathroom, refrigerator, and coffee pot to top it off.

ELI: What would you say was your welcome to the major leagues moment?

JASON: This is probably a cookie cutter answer like everyone else’s, but you never forget your first game in the big leagues. It would have to be my first win against the Braves. But I also got my first hit, driving in a run. It was a very cool moment for me, and it is something I'll never forget.