Is Nomar Done As A Dodger?

Share All sharing options for: Is Nomar Done As A Dodger? 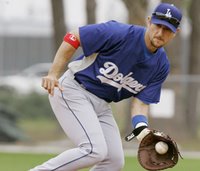 Nomar Garciaparra signed a two year deal worth about 18 million dollars last off season that some would argue, he has not lived up to. Not only that, but he did draw some interest this season from teams looking for a somewhat of a utility infielder. And with that interest, you would think the Dodgers would trade him for some proven pitching to make room for Andy LaRoche at third base. LaRoche is expected to be ready next season and Loney is already proving that he can play at this level so they would be able to grow into the league together, like they have through the minors. That kind of chemistry can really help a team in a close division. Also, by letting go of Nomar also gives them room to make a big splash in the off season. Beyond that, Furcal is off the payroll after next season so it is possible to assume prospect Chin-Lung Hu will be called up giving them even more money to improve their pitching. The Dodgers are putting themselves in a spot to be a great, young team with great pitching and solid offense.