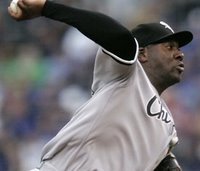 According to SI.com, White Sox pitcher Jose Contreras has cleared waivers, and is available to any interested team. Although Contreras has pitched well lately, he is 6-14 with a 6.24 ERA. Many teams are interested, just money is the main concern. Contreras is set to make 20 million dollars over the next two season, so if any trade happens, the White Sox would have to pay up too. The Dodgers are looking for a veteran pitcher after refusing to give up prospects for Jon Garland. The Dodgers could possible trade Nomar Garciaparra to make room for Andy LaRoche, that would balance out the salary's and give the teams something beneficial. The Cubs, who have had some trouble pitching as of late could offer up some prospects, but the White Sox would have to take most of the bill for that to happen.