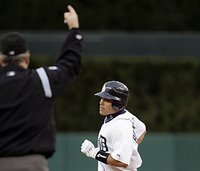 The Mets are losing both of their struggling catchers to free agency this off season and would like an upgrade behind the plate. The Tigers have a thirteen million dollars option for Pudge, who turns 36 in November. They were also looking into Jorge Posada, but it is unlikely he will leave the Bronx. "I can't imagine Posada not playing for the Yankees, but that's an interesting one, obviously, because it's the other New York team," said the competing GM, who spoke on condition of anonymity. "I don't know if the Tigers would pick up Pudge's option, though it's tough to imagine the Tigers without him, too." If both catchers are off the market, they could look to Michael Barrett, Brad Ausmus, Jason Kendall, or Jose Molina, probably the second tier for catchers. However, they could always make a trade for players they have tried to acquire before. Like Ramon Hernandez or Bengie Molina. Both are under contract and are having decent years. The cheapest move is to bring in Molina or Hernandez to platoon with Castro, who is putting up great numbers in few at-bats. If you platoon Molina, who is batting .267 with 12 HR and 63 RBI, with Castro, who is batting .282 with 9 HR and 27 RBI, you have a solid platoon behind the plate.