Miguel Cabrera On The Move?

Share All sharing options for: Miguel Cabrera On The Move? 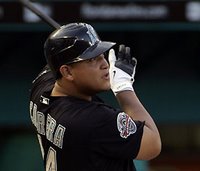 The Marlins are known for taking chances on inexpensive players and may not be able to afford Miguel Cabrera's asking price when he becomes a free agent. He is making 7.4 million this season and will make more next season. He won't be a free agent until 2009 putting no pressure on Dominguez to develop. The Marlins will have a lot of calls about Cabrera in '08 offering prospects and proven players, so they should consider making a trade. The Red Sox, who are interested in adding a young third baseman to replace Mike Lowell, have success in trading with the Marlins, so a trade there is possible. The Angels, who are looking to add Alex Rodriguez, make look for a cheaper addition in Cabrera. It is possible to even see the Yankees go after him if they lose out on Alex Rodriguez. At this point, any team with a lot of prospects looking for a proven third baseman would be interested. So you can probably rule out the Cubs, Diamondbacks, Cardinals, Brewers, Nationals, Mets, Braves, Mariners, White Sox, Royals, Orioles, Devil Rays, and Blue Jays, who all have good third baseman's or good prospects they are not willing to give up.