Share All sharing options for: Orioles Looking to Extend Bedard 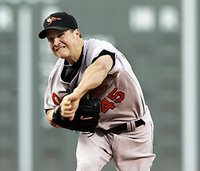 Erik Bedard has absolutely dominated the American League and the Orioles have noticed. And although he is locked up until 2009, they are looking to give him a long term extension to keep him in Baltimore even longer. Bedard is 12-4 this season with a 3.11 ERA and 199 K and has absolutely dominated since early June. Since June 21st, he is 8-0 with a 2.38 ERA and 87 K and has not gone less than six innings. His agent, Mark Pieper, has negotiated some big contracts so Bedard won't come cheap, especially while he is doing well. Bedard, 28, could command a a 5-7 year deal worth about 16 million dollars. If a deal falls through this off season, it is possible that we could see him be traded while he is at his best. The pitching depth this off season is good, so after pitchers like CC Sabathia, Carlos Zambrano, and Livan Hernandez are signed, you put someone like Bedard on the market to teams that are desperate for pitching, and you could potentially bring in a boatload of prospects.