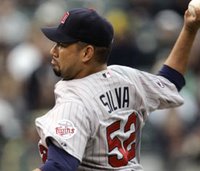 The Phillies worked hard to acquire some veteran pitching at the trade deadline but failed to acquire all they wanted. They worked hard with the Minnesota Twins to acquire Carlos Silva, but talks went cold days before the deadline. But the Phillies are not trying again to acquire the innings eater, who is currently 10-12 with a 4.10 ERA and 72 K, was also scouted by the Braves at the deadline. Silva is a free agent at the end of this season so trading him may not be the worst thing, especially if they acquire a prospect or proven player in return. Silva began his career with the Phillies and was 8-1 with a 3.82 ERA in 171.1 innings in relief. Silva, now a veteran starter, would benefit in the NL especially as a back of that rotation guy.