Rangers Will Go Hard For Rowand

Share All sharing options for: Rangers Will Go Hard For Rowand 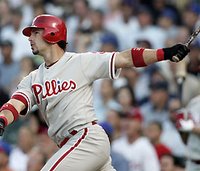 The Rangers top priority this season is getting a quality center fielder. With Rowand, Jones, Hunter, Cameron, and Fukudome on the market, it won't be hard to land one. Jones and Hunter will probably be looking for a five year deal in the fifteen-seventeen million dollar range. Rowand, who is batting .306 with 21 HR and 70 RBI, will likely command a four year deal, around thirteen or

fourteen million dollars. That should indicate that the Rangers, who have money to spend, would go after a quality outfielder like Rowand while leaving money to pursue other needs. The Rangers also need a good starting pitcher, just to fortify this rotation some. Curt Schilling would be a great addition because not only is he effective, but he is willing to work with the young pitchers.