A-Rod, Lowell May Be Switching Teams

Share All sharing options for: A-Rod, Lowell May Be Switching Teams 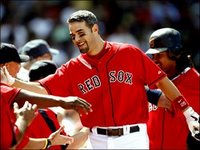 Both Mike Lowell and Alex Rodriguez have the chance to become free agents at the end of the season, and with the Red Sox interest in signing Rodriguez, it would make sense that Lowell would leave and probably sign with the Yankees looking for a cheap, but solid alternate. Rodriguez is batting .305 AVG with 43 HR and 123 RBI and is just 32 with a solid 5-6 years ahead of him. Assuming he opts out, he should be a hot commodity. Lowell, who will be seeking a three to four year deal is having a career year batting .324 AVG with 17 HR and 93 RBI but has been inconsistent over the years. He is just 33, and the Yankees would be smart to sign him because he has hit .622 AVG with 3 HR in his career at Yankee Stadium and is a former Yankee.

The Angels will be going hard for A-Rod too so it won't be a surprise if the Red Sox have ongoing negotiations with Mike Lowell and A-Rod in case one falls through. "I’d be lying if I said I never thought about, but I’m not consumed by it," Lowell said. "I know I’m going to sign somewhere next year. I obviously have my preferences. We’ll see what happens." Here's a thought though: What if the Red Sox unload Julio Lugo and try Rodriguez at shortstop?