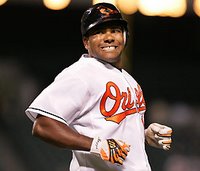 The Baltimore Orioles put Miguel Tejada on the waiver wire and after just one team came up interested, they pulled him back. Only the White Sox had shown interest when they put him on and they would rather wait for all teams to be interested rather than just one. Furthermore, I'm sure they realize that by keeping him with the Orioles and building up his talent again, they could get more young players from a given team. So expect teams like the White Sox, Cubs, Angels, Giants, and maybe even Red Sox jump in on trading. All these teams have young shortstops in their systems that can be traded, which should excite the Orioles. This season, Tejada is batting .310 with 10 HR and 53 RBI in just 85 games. His power is down some but he is still just 31 and has another six to seven solid years left. Right now, the White Sox appear to be the front runners because they are desperate to acquire a big bat. But right behind them is probably the Angels, who are looking to make a big splash after they failed last off season.