Share All sharing options for: Tigers Still After Pirates Wilson 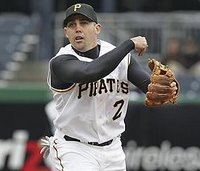 After a month of trying to make a trade, a new twist could indicate that they are even closer. Tigers outfielder Craig Monroe has cleared waivers yesterday giving the Tigers ten days to trade him or release him. Jack Wilson cleared waivers as well which could indicate a trade is in the works. But, the Tigers called up Ramon Santiago, a defensive specialist from AAA Toledo to back up Carlos Guillen. Wilson will probably be suited in a backup role with the Tigers, but would be an addition nonetheless. He is batting .268 with 6 HR and 34 RBI and has a great glove and good speed. Monroe, who is batting .222 with 11 HR and 55 RBI, would help out nicely in the power department for the Pirates. Wilson is set to make 6.5 million in '08 and 7.25 million in '09 with a 8.4 club option. So if any trade were to happen the Pirates would probably have to give cash considerations as well. Wilson is set to make 4.77 million dollars this year, and he is up for arbitration again this season. So if they do a trade that is one for one, it will probably be Craig Monroe to the Pirates for Jack Wilson and cash considerations.