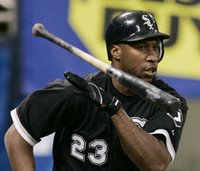 The Chicago White Sox have signed outfielder Jermaine Dye to a two year extension, worth 22 million dollars. Dye struggled in the first half of the season but has rebounded and is hitting .245 with 24 HR 62 RBI. Since nearly being traded to the Red Sox on July 31st, Dye is batting .327 with 5 HR and 10 RBI. This Free Agent Class keeps getting worse and worse as the top free agents keep getting resigned. Carlos Zambrano, Carlos Guillen, Mark Buehrle, Jermaine Dye, to name a few. Kosuke Fokudome can now be considered one of the top outfielders on the market, behind Torii Hunter and Andruw Jones.