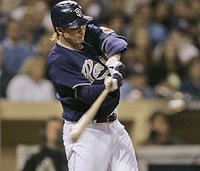 The White Sox were looking to acquire Khalil Greene at the trade deadline in a trade for Jermaine Dye, but that fell through. Coming into the off season where they will lose Dye, it seems likely that Jon Garland is out. Jon Garland and Brian Anderson for Khalil Greene, Heath Bell, and a minor league prospect would really help the Padres a lot, and would improve the White Sox bullpen, and infield situations. This trade seems pretty even because Greene is a big upgrade in the lineup and the field, and Bell can really help out that bullpen, which is what they need. Yes, the Sox give up Garland, but they do have a rotation backed by youngsters Danks and Masset, who are showing a lot of upside on the mound. But for Greene, who is batting .240 with 19 HR and 66 RBI and Bell who is 5-3 with a 2.27 ERA and 69 Ks already puts more wins in the win column. This could be the trade to make for Kenny Williams this off season to improve him team.


Joe Crede On His Way Out?: Joe Crede has been sidelined for a couple

months now and has given plenty of space for Josh Fields to grow into third base. Many scouts are saying he is the next best thing for the White Sox, and is already putting up decent numbers. In 60 games, he is batting .247 with 12 HR and 39 RBI but has dominated in his last ten games and against lefties this whole season. Crede could be traded for a minor league pitcher or two, possibly to the Pirates, who they are on good trading terms with. But, a lot will determine how Fields finishes the season.