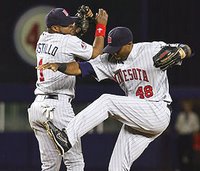 After hearing that Twins outfielder for the last nine seasons is calling off contract negotiations, the White Sox are making it known that they will go after him. Hunter, 32, is batting .301 with 26 HR and 90 RBI and still has his best years ahead of him. The Twins are expected to offer him a three year deal, worth 45-50 million but it seems more likely that the White Sox, who have money to spend and are looking to make a splash, will offer a five to six year deal, worth 75-85 million dollars. Since 1999 at U.S. Cellular Field, Hunter has batted .472 with 12 HR, 15 doubles, and a triple. This season versus the AL Central at their stadiums he has batted .275 with 4 HR with 14 RBI. The White Sox would be smart to get him no matter what, because he would fit in very nicely with in center shifting Jerry Owens to left and putting some pressure off him in the field. Hunter alone, would make the White Sox a much better team. However, if Hunter signs with the Twins after the season which is still possible, the White Sox will look to sign Aaron Rowand or Kosuke Fukudome.