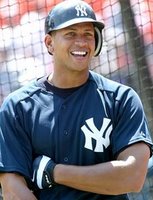 What an amazing end to a crazy season. Many leads were shrank and got big again, and some were even blown. The Rockies are making a case to be in the playoffs winning 13 of 14 to close the season and force a one game playoff against the Padres. Even if they don't win, that is great baseball. Furthermore, the Marlins and Nationals played great baseball towards the end to knock out the Mets and pull the Brewers closer to the Cubs, even though they weren't able to hold on. The Red Sox made it interesting against the Yankees but were also able to hang on, but they lost Clay Bucholz for the playoffs, which may or may not have any impact on the team. Craig Biggio, Barry Bonds, and Greg Maddux finished their seasons with their respective teams, although they might not be done. Here are my 2007 Awards before they are officially announced:

National League Cy Young: Jake Peavy, Padres
- Although it could change if he loses the one game playoff, he has been consistent all season leading the Padres rotation.
STATS: 19-6 W-L, 2.36 ERA, 234 K.

National League Rookie of the Year: Ryan Braun, Brewers
- Troy Tulowitski is a close second, but Braun came up and showed impressive numbers for such a short time in the majors.
STATS: .324 AVG, 34 HR, 97 RBI, 15 SB.

National League Comeback Player of the Year: Derrek Lee, Cubs
- Lee broke his wrist in 2006 and the team fell apart from their finishing with a league worst 66 wins. Now he came back and although his swing was changed, he developed into more of a pure hitter than a homerun hitter.
STATS: .317 AVG, 22 HR, 82 RBI, 6 SB, 43 2B.

National League Manager of the Year: Lou Piniella, Cubs
- The Cubs were all but eliminated in mid June, when nothing seemed to be going their way. Piniella stepped up and put the attention on him and since them, the team had the best record in baseball, and he lead them into the playoffs.
RECORD: 85-77 W-L, .525 PCT, Playoff Appearance.

American League Cy Young: Josh Beckett, Red Sox
- He was very good all season and stepped up to lead the rotation. Although Sabathia won some big games for the Indians, Carmona and Byrd were right behind him in key games.
STATS: 20-7 W-L, 3.27 ERA, 194 K.

American League Rookie of the Year: Brian Bannister, Royals
- I am pretty sure he is still considered a rookie, but has stepped up nonetheless. Not many rookie pitchers could have done as well as he has on a team with such poor run support. He was like a veteran for that staff and really helped some of those young guys.
STATS: 12-9 W-L, 3.87 ERA, 77 K.

American League Comeback Player of the Year: Carlos Pena
- With out a doubt, surprised us all. Stepped up huge for the Devil Rays and will be a definite impact for the next several seasons.
STATS: .282 AVG, 46 HR, 121 RBI, 1 SB.

American League Manager of the Year: Mike Scoiscia
- He didn't have a lot to work with, but found the right young players and used them properly and it was obvious by the lead they had ending the season.
STATS: 94-68 W-L. .580 PCT.