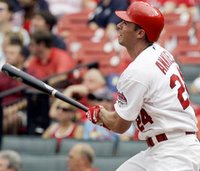 The New York Daily News is reporting that Cardinals pitcher-turned-outfielder received a one year supply of HGH in 2004. They claim they have evidence linking him to a pharmacy near his home, with doctors that work in the pharmacy signing his prescription papers. However, he stopped receiving them in 2005, when the league banned HGH, which means he has done nothing wrong unless he took them after 2005, which would result in a 50-game ban. Personally, I think it is a little suspicious that this would come out a day after a two homer game with seven RBIs. Ankiel has sparked the Cardinals offense since his call up batting .358 AVG with 9 HR and 29 RBI.