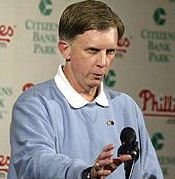 The Astros have opted to go with former Phillies GM Ed Wade as their new GM, ending his two year stint away from the general manager position. They said the Phillies assistant Amaro Jr. was the other finalist, but they felt Wade might get the job done sooner because of his experience in the league. Amaro will probably be one of the finalist for the Pirates opening now. Wade didn't take the Phillies to the playoffs, but he made some good trades, with some bad ones as well. However, he has a good eye for talent having drafted Pat Burrell, Ryan Howard, Cole Hamels, and Chase Utley, to name a few. He is also a very active GM, so there will probably be some changes right away. He was often criticized for letting Curt Schilling and Scott Rolen get away, along with his tendencies to giving large contracts, with no-trade clauses to aging players. Furthermore, when he had the opportunity to sign Jim Leyland, who most preferred, he opted to sign Charlie Manuel. My conclusion on him though is that his trading is average, contract negotiating is weak, while his eye for raw talent is excellent.