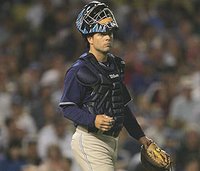 Michael Barrett had three solid years with the Cubs, despite on field altercations in two of them. This season, after fighting with Carlos Zambrano and clashing with pitchers Rich Hill, Will Ohman, and Ryan Dempster, the Cubs traded him to the Padres for catcher Rob Bowen. After being suspended for one game, and a minor concussion, Michael Barrett is ready to put this season in the books and start fresh wherever he ends up. The Marlins, who haven't had much success behind the plate since Ivan Rodriguez, could use a solid bat and veteran to place in the lineup. Although he struggled defensively, he has batted .451 AVG with 4 HR and five extra base hits at Pro Player Stadium. He also played in the NL East for six seasons while he was with the Expos. If the Marlins end up trading Dontrelle Willis or Miguel Cabrera, they would have even more room to add Michael Barrett, who is probably looking for a three year deal, worth about 12-15 million dollars. If the Marlins balk and withdraw from the running for Barrett, it is likely to see the Mets, and maybe even the Angels go after his services.