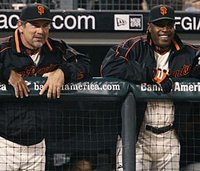 Many are suggesting that the Tigers go after Barry Bonds making him their part time DH. They do have Gary Sheffield, but he can also platoon with Cameron Maybin in leftfield, so at-bats will be will spread. He will cost less this off season and will be just as productive, if not better coming over to the American League. Not only that, putting him in your lineup where teams are more likely than not going to pitch around him, you will have an extra runner on base. With Sheffield, Bonds, and Maybin, you could make sure they each got at least 120 games, with at least 300+ AB. Leyland would definitely be able to control the veteran Bonds, and Bonds would benefit to being in a locker room with a contending team. But how will Bonds and Sheffield do? They did play against each other for awhile when he was on the Dodgers, so there could be a feud or friendship there. From a business standpoint, he will draw so many fans to the stadium, jersey sales would go up, and media coverage as well. Not only that, but he is batting .276 AVG with 28 HR and 66 RBI, numbers that would definitely improve in the American League. It would be a smart move for the Tigers to take a chance on him, he won't cost much, and will do a lot for the Tigers.