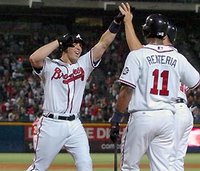 The Braves started the season pretty well but were missing that one thing to make a serious run at the playoffs. Jones one more chance. Jones has struggled a lot this year and many believe it is because he is in a contract year. This season, Jones is batting .220 with 24 HR and with 88 RBI and is in the final year of his six year, 75 million dollar deal making 13.5 million this season. Jones might accept a one year deal with an option for a second year giving him one more chance to reestablished his market value. The Braves do have room in the payroll to resign him, and could give him a one year deal worth 13-14 million dollars with an option for a second. That way, it gives the Braves a chance to not only make a run at the playoffs, but build up his trade value so if they are out of it, they can get some good young pitching. Personally, I think That addition may have come to late in Mark Texeira but there is little doubt in any ones mind that they could keep up with the Mets, especially if they give AndruwBoras' plan is to give the Braves a chance to sign him while he is on the open market. However, Jones has little leverage when negotiating a new contract so opting to stay with the Braves would give him the opportunity to test the market next off season, whether he decides to sign with the Braves or not. In the off season, if will probably be up to the Braves if they want to keep him or not because they could always attempt to invest in other outfielders Torii Hunter, Aaron Rowand, or even Kosuke Fokudome.