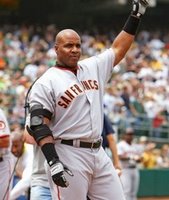 According to Barry Bonds' official website, Barry Bonds will not return to the Giants next season. The team will call a press conference to officially announce it, but Barry Bonds has already informed the media through his website: "During the conversation with Peter McGowan I was told that my play this year far exceeded any expectations the Giants had, but that the organization decided this year would be my last season in San Francisco. Although I am disappointed, I've always said baseball is a business -- and I respect their decision." Bonds plans on playing next season, but it is uncertain who really wants him. It is possible to see the Angels make a move, but they have solid team and if they are hoping to add A-Rod, they probably do not have room for Bonds. Although very unlikely, if the Yankees are able to trade Johnny Damon, they could put Giambi at first and sign Bonds, but I doubt that the Yankees want someone like Bonds in New York. I hope the Giants give Bonds a proper send off in his final six games at AT&T Park before heading to LA for the final three games. He got the Giants to a World Series, drew millions to the park over his years, and broke the All-Time home run record as a Giant. Furthermore, if there isn't any interest in him he might call it a career because he accomplished his main goal this year of breaking the home run record.