Brewers Power Their Way Into First

Share All sharing options for: Brewers Power Their Way Into First 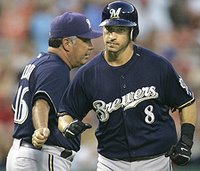 The Brewers made history today hitting three straight homeruns to start their game against the Reds. Ben Sheets didn't have to do much from there having a seven run lead by the fourth inning. Braun hit his thirtieth homerun and Ben Sheets went deep allowing the Brewers to save the 'pen for the Pirates this week. With the Cubs failing to beat the Pirates and the Brewers able to hold their ground for the weekend, they were able to take the lead today, and will look to remain red hot versus the Pirates. New Cubs pitcher Steve Trachsel struggled again which makes you wonder if he will stay in the rotation. When pitching fails, everything starts to fall apart, and it was obvious after Trachsel gave up six runs, that all momentum was lost. The Brewers can't be stopped right now, and really could run away with the division if they keep playing the way they have been.