Can't Count Out Champs, But...

Share All sharing options for: Can't Count Out Champs, But... 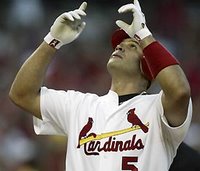 The Cardinals are capable of doing the unthinkable, and have shown that by creeping up in the division over the past month. But they are out by four games and have lost five straight. And they seem to have lost some steam after the Encarnacion freak accident, and the Ankiel allegations. The Cardinals have 20 games left. To stay in contention, they need to sweep the Cubs, and go 15-5. They have good coaching, but I do not think some of their young guys are used to playing this long to hang on. Also, their pitching isn't consistent right now, and that is key in a division race. If they do not make it this year, they will have a good team next year with Pujols, Rolen, Ankiel, Duncan, and pitchers Wainwright, Carpenter, Looper, and Reyes assembling a pretty solid, young team. This team will definitely be in contention with the Brewers and Cubs in '08 if not this year.