Casey Will Likely Be Released

Share All sharing options for: Casey Will Likely Be Released 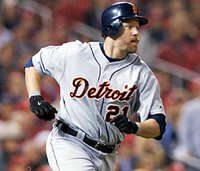 Tigers first baseman Sean Casey will be on the open market this off season, probably looking for a everyday role at first or as a DH. Young shortstop Ramon Santiago is doing well at his position for the time being and because Carlos Guillen's knee's are getting weaker, it makes sense that he will become the everyday first baseman next season. Casey's power numbers are down, but he is still batting .287 with 3 HR and 49 RBI. He is making four million this season and probably could get a two to three year deal worth 3-5 million dollars per year. Casey would be an addition to any team. He is a .301 career hitting who can put up good power numbers, hitting 29 doubles and a triple with three homeruns. Also, he is a veteran who is considered by his teammates and players around the league as the nicest player around. That kind of attitude would bring a lot to a team, especially a one

scattered with youth. If the Yankees are looking for a stop gap for a year or two waiting for young Cuban signee Juan Miranda to develop, the New Jersey native would definitely be a legitimate option. However, they do have young player Andy Phillips and Eric Duncan so they could take a risk on them. Also, free agent first baseman like Mike Lamb, who passed through the Yankees system in 2004, could step in as the first baseman of the future if Miranda or Duncan can't find their swing. He is just 32 and could get a two to three year deal worth about 7-8 million per year. As of right now one thing is for certain, the Tigers have little to no interest in retaining Casey and plan to let him walk.