Share All sharing options for: Cubs Fight Back To Hold Division Lead 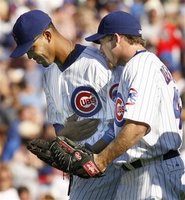 The Cubs have been doing a whole lot of the same lately, which is giving up an early lead and chipping away at it the rest of the game. Today was a fine example. Rich Hill, who was coming off a solid start, gave up five runs in five innings of work. His curve ball didn't have the same bite to it and he wasn't going to his fastball like he did in his last start. However, the Cubs added two more runs in the sixth to make it 5-3 and added one more in the seventh off a Matt Murton homerun to make it 5-4. In the top of the eighth the Brewers and Cardinals had officially won their games bringing the Brewers just a half game out if the Cubs were to have lost. But Derrek Lee came up with a clutch homerun in the eighth and Ryan Dempster had a perfect ninth to win 6-5 and keep a 1.5 game lead. This week in the NL Central will decide a lot with the Cubs taking on the Dodgers and the Brewers and Cardinals taking on the Astros and Pirates, respectively. If the Dodgers can hold on and take two of three or split, they should be in good shape to take on the Cardinals in five games the following week.