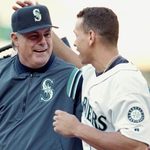 According to the New York Post, Scott Boras has spoken to a potential new owner for the Cubs about signing A-Rod and making him a part owner of the team. Rodriguez, who has three more years left on his contract making 81 million dollars, can opt out after this year and join another team. Although Boras is saying he will be looking for a ten year deal worth about 30 million a year, he will probably have to settle for a seven to eight year deal worth about the same. The Chicago Tribune plan to sell the team after the season is over to one of the many bidders on the team. Most Cubs fan hope and pray that it is Mavericks owner Mark Cuban, but baseball hierarchy don't think that would be such a good idea. They also refused to show Cuban sitting in the bleachers last week at a Cubs game suggesting they already don't like his presence. Many think it will be John Canning however, who is representing a group of men in a possible buy. Many other teams are also interested in A-Rod, including the Angels, Dodgers, Red Sox, and Giants, but if A-Rod is guaranteed part ownership, it might be hard to turn that down, especially with a winning team. But where would he play? And would he be able to fit in with the Cubs? All these questions will have to be addressed at the end of the season.

UPDATE: A-Rod's agent denies the report: "Great players with great demand create great rumors," Boras said in a telephone interview with The Associated Press. "While I would enjoy having lunch with Mark Cuban and Canning, at this point of the year that conversation would not include Alex Rodriguez. I have not talked to anyone."