Share All sharing options for: Dodgers Prepare For Santana Craze 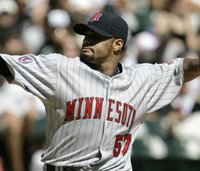 The Dodgers are preparing to make some critical decisions this offseason, including whether or not to trade for Twins pitcher Johan Santana. The Dodgers have a lot of prospects that they could trade away to acquire the All-Star pitcher, who would probably put up better numbers in the National League. What would it take to acquire him though? According to sources, the Dodgers would attempt to trade Clayton Kershaw and Matt Kemp to the Twins for Santana. Kemp would replace Hunter and Kershaw would be slotted right in the rotation. I think that it would probably take more though. The Dodgers have Chin-Lung Hu waiting in the wings to take over at shortstop and he has been doing very well as of late. And with Furcal entering the final year of his contract, you could see Furcal, Kemp, and Kershaw go to the Twins for Santana, cash, and maybe a minor leaguer. Furcal would take over at short and Bartlett would platoon at second for another year. It would give Twins a solid shortstop and trading option in July next season if needed. The Dodgers would definitely be a force in the NL West with this potential lineup. They will have for great pitchers, and a solid core of youth that could hold the NL West for the next years to come.