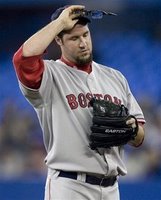 Eric Gagne has been able to pitch out of some of the most important games for his team, but since joining the Red Sox, where the focus in Boston is on baseball, he can't close anything. He blew the save tonight giving up three earned runs and is now 1-2 with a 9.00 ERA with three blown saves with the Red Sox. Although the Dodgers have some of the most passionate fans in baseball, baseball is not the focus in LA like Kobe and the Lakers are. Same with Texas, where he is pitching in a low pressure environment where not many people care whether they do well or not. So that took a lot of pressure off him to perform and he did going 2-0 with a 2.16 ERA and 16 SV. The Red Sox thought that would not be an issue and traded Kason Gabbard, David Murphy, and Engel Beltre. Gabbard will fit nicely in the rotation and Murphy will probably be with the Rangers next season. So the Rangers traded away three solid players for one who cannot close a game, and it is only affecting the Red Sox chances to hold the division. Gagne is a free agent after the season and probably won't stay in Boston. He probably will get a contract that has less incentives, but similar guaranteed amounts of money. It is possible to see the Phillies, who were trying to build their 'pen all season to make a run for him. Maybe even the Brewers, who could use a solid setup man or late inning reliever, could sign Gagne to a deal. There is about a week and half left in the season it so there is some time to see if he can turn it around, but I doubt the Red Sox will pitch him in any meaningful games.