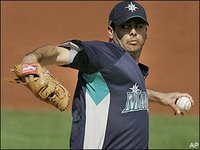 Horacio Ramirez was traded by the Braves last December to the Mariners for pitcher Rafael Soriano. At the time, many wondered why the Mariners would accept such a trade because Soriano is regarded as one of the best late inning relievers in the game. He is just twenty-seven, and was able to hold an ERA under three while he was in the AL. So jumping leagues would probably be even easier for Soriano, joining a team with solid defense and a favorable ballpark. Ramirez showed promise as a youngster, but began to struggle with age. He hit the disabled list three times during the 2006 season and had a ERA over four before joining the Mariners. Anyways, the Mariners gave him an opportunity to help their rotation and he hasn't been much help at all. The coaching staff isn't even trusting him to get the job done warming up pitchers after facing just one batter. Ramirez is eligible for arbitration after this season and will be a free agent in 2008, but I am sure they will probably release rather than sticking him back in that rotation. Ramirez is making 2.65 M this season so if he goes to arbitration he will probably make about the same, maybe a little less. I think there would be interest in Ramirez if he is released. The Mets are known for bringing in players looking for a fresh start, and Ramirez probably needs one. The Rangers could use another pitcher and may look to him as a cheap risk with a lot of upside. Ramirez was 8-4 coming into September so he hasn't been struggling like this all season which makes me think that the Mariners will probably hold on to him for one more year. Furthermore, he is 6-3 at Safeco Field with a 5.59 ERA, but he is getting support so it isn't exactly bad. Bill Bavasi will definitely assess the situation and even put him out there if they can get something in return, but I think he will be with the Mariners in 2008.