Share All sharing options for: How Teams Recruit Players 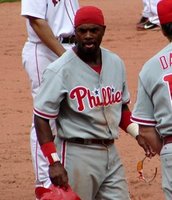 Come September, teams are making plans to who they would like to acquire and who they may be looking to add, and the way they get that out is through their players. Players will mention how they would love to have a guy on there team, or say what a great guy he is to the media, or will go as far as talking with him during warm ups before a game. There are many examples of this around the league that come up mostly during the month of September. The Nationals get an article in the Washington Post saying they want to bring in Andruw Jones, which then gets Jones thinking more about his future. Another example is with Jimmy Rollins, who is a long time friend of Dontrelle Willis. He is saying to the media, the Phillies front office, Dontrelle Willis, and the Marlins front office that the Phillies want Dontrelle Willis on their team. That gets Willis excited about a new opportunity and gets players on the Phillies talking more. I wouldn't say this happens all the time, but it does happen every year. It

happened with the Yankees trying to recruit Roger Clemens. They had Torre, Jeter, and Pettitte telling the media how much they want to have Clemens on their roster. That always makes it back to the person they are talking about and it is how the players recruit someone for their team. It will even happen during the off season, but not as much because players are not always around. This is not illegal, but this is when people are interested, and it is basically the first step in negotiations when trying to add a player.