Share All sharing options for: Interview with Branch Rickey 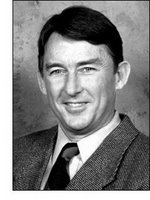 Last week, I had the privilege of interview Pacific Coast League President Branch Rickey. Rickey has been apart of baseball his whole life, being the son of Branch Rickey Jr. and the grandson of the famous Hall of Famer Branch Rickey, who is probably most remembered for signing Jackie Robinson. He has helped improve the Pacific Coast league in attendance, and before that, developed many great players in the Pirates and Reds systems like Barry Bonds. I want to thank Branch Rickey for doing this interview for me, I really appreciate it.

ELI: What are your day to to day duties as the President of the Pacific Coast League?

ELI: During your time, minor league attendance numbers have sky rocketed. What has been done to increase that?

BRANCH: I think it is the improvement of the stadiums. A lot of the stadiums are old and when you can build a new stadium, in a city that wants baseball, you can draw people to the stadium. Also, when the facilities in the stadiums like bathrooms, food, and seats are upgraded, you get people of all ages wanting to come to the park. In some instances, minor league stadiums still being used today are from Franklin Roosevelt's job programs from the thirties. So you can imagine that those are smaller, and old fashioned, which some people do not like.

ELI: You once worked with the Pirates and Reds in Player Development. Did any players cross your path that went on to be great players?

BRANCH: Barry Bonds was in the minors when I was with the Pirates. He was a smaller guy back then, and a great spray hitter. He has come to be a dead pull hitter, but you could see his power and understanding of the game back then. If I had to compare him to any player, it would Willy Stargell. Willy was similar to Bonds. He was once a spray hitter who turned into a dead pull. Very slender, but had great power to both sides of the field, similar to Bonds now.

ELI: Your grandfather developed the minor league system, did you ever hear how the idea came about?

BRANCH: Yes. What he did was take all the independent leagues from around the country and rated them based on the level of play, grouped them into a league. He was working with the Cardinals at the time who couldn't afford big time players. So, to be able to dig into these leagues, or systems, he was able to get good, young talent. At first, the teams that were with a certain club had verbal agreements, which ultimately turned into contracts like they are today.

ELI: Jackie Robinson wasn't considered the best player in the Negro Leagues. Why do you think he was chosen over some of the better players?

BRANCH: Actually, I think the consensus was that he was the best player, by certain criteria however. He was the best able to withstand, develop, and lead a team. Furthermore, he was certainly the most athletic, and probably the best mentally to face arguments and other things like that.

ELI: Your grandfather and father played key roles in baseball and developing players. What was the best baseball advice they gave you?

BRANCH: I do not think it was anything verbal, more by way of example. I saw how they dealt with problems and handled their day to day duties and how they did it with integrity and pride.

ELI: Were you upset to see the Dodgers move from Brooklyn to Los Angeles?

BRANCH: I was actually standing right next to my grandfather when he heard the news. He thought it was very unfair, deceptive, and they didn't have the right reasons. But we had quite an attachment to Brooklyn, we saw many players grow up, and fans keep coming back. Although he said it was "The Greatest Betrayal of sports that I've ever known," it really was good for baseball in the long run.

BRANCH: The Sacramento Cats did very well this season.

ELI: How about Des Moines?

BRANCH: They are impressive because they are in such a small city.

ELI: What is your favorite baseball movie?

ELI: What has been the best baseball game you have ever been to?

BRANCH: I was at the game where Roberto Clemente got his 3,000 hit, which happened to be his last of his life. I was also at the 7th game of the 1960 World Series when the Pirates beat the Yankees. Both those were very exciting.