Lohse Set To Cash In

Share All sharing options for: Lohse Set To Cash In 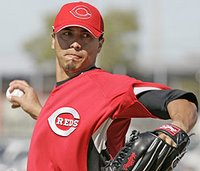 Phillies pitcher Kyle Lohse is preparing to become a free agent hoping Scott Boras can't once again work his magic to swing a big deal. This season, Lohse is 8-12 with a 4.47 ERA and 110 K, but has only put together two winning seasons in his career. I don't see him getting too much money, but he could get a four year deal. But there are not too many pitchers on the market so an innings eater like Lohse might be considered one of the top pitchers. Also, he has experience in the playoffs, and is capable of reaching ten double-digit numbers with a solid team. Boras probably will listen to the NL teams more, especially because of the success players have after pitching in the AL most of their career. The Astros are starved for pitching and could make a run at him, but the Astros are not fans of Boras. Maybe even the Rockies, who are looking to acquire a pitcher, may look to someone like Lohse if they fail to pull a trade. But I am sure Lohse knows about Coors Field and its tendencies. For now, we can assume that if he leaves the hitter friendly Citizen's Bank Ballpark, he would probably head to the West Coast where he is from, and solid defense is common. The Dodgers, Padres, and Diamondbacks might be interested and I do not think strained relationships will come in the way in the West because every team is looking for a way to push ahead of the rest. Behind some of the pitchers like Schilling, Glavine, and Pettitte, Lohse is likely to go around the Winter Meetings, so he can build up his price more.