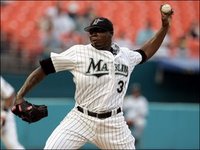 This time last season, the Marlins were on the verge of making the playoffs and were enjoying the leadership from manager Joe Girardi. Now, they are eliminated from playoff contention and have their best pitcher with the third most losses in the majors. Furthermore, their franchise player Miguel Cabrera has put on more then twenty pounds this season and could be making the switch to first base if it continues. Are the Marlins on the verge of another minor fire sale? The Phillies are interested in acquiring Dontrelle Willis, and could make a big splash by trying to acquire both. They could offer up Pat Burrell, cash, and several prospects for the two, but probably would rather hold on to Burrell if they are losing Rowand this off season. The Dodgers are interested in Miguel Cabrera and could offer Nomar Garciaparra, cash, and a pitching prospect for him. That would give the Marlins a veteran infielder, and a young pitcher while staying young with Loney and LaRoche. Also, they will probably lose Miguel Olivo via free agency and would probably like a long term catcher to man 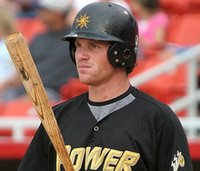 the spot for the next several seasons. The Astros are overloaded with catchers and would probably except a young pitcher for someone like J.R. Towles. Maybe Sergio Mitre, they probably want more though. Pitching wise, who knows if you can rely on Nolasco, Johnson, or anyone else in that rotation. So it is possible that the Marlins would try to sign veteran pitchers Carlos Silva, Joel Pineiro, or former Marlin Matt Clement. All these guys would save their pitchers, and allow them to ride the season in the shadows behind these big guys. The Marlins have a long way to go, but will probably have to start with taking a step back.