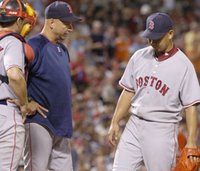 The Japanese season is a lot shorter than the Major League one, and the Red Sox are afraid that Matsuzaka cannot handle another two months of baseball. He is already showing signs of fatigue, and is only hurting the club right now. But what can they do? My suggestion would be to allow him to skip a start and allow Buchholz to make another start. Or, once the Red Sox clinch a playoff berth, rest him for the rest of season, having throw side sessions or start once or twice more, then he will be ready to go for the playoffs. This season, Matsuzaka is 14-12 with a 4.44 ERA and 179 K. But his last start, he only lasted 2.2 innings, and in previous starts is throwing way to many pitches over the plate. This would suggest that he is fatigue and that he is just throwing the ball. I think for a team that is conscience of the pitchers health, they will probably limit his pitches, because the more he pitches, the more he hurts the team later on.