Share All sharing options for: Mets Should Trade Martinez 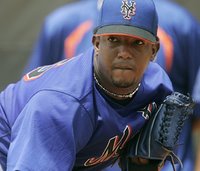 Pedro Martinez will be entering the final year of his four year contract worth 53 million dollars and recently came out saying if he gets hurt again, he will retire, rather than going through rehab: "If anything goes wrong: Hasta la vista, baby," he said in article on FOXSports.com. I think that should raise a red flag to Omar Minaya and the Mets front office suggesting they should trade him rather than risk loosing him forever. If he were to get injured next season, the Mets would have to find a permanent stopgap, not just a Triple-A pitcher for a couple of months. I think they should shop him this off season for young pitching, maybe a young outfielder. He is pitching well, so getting a solid position player would clear the way for Mike Pelfrey or Phil Humber. This season, he is 2-0 with a 1.89 ERA and 17 K in 16 IP. The Devil Rays have Elijah Dukes, Rocco Baldelli, or B.J. Upton, but in order for him to be traded, he would have to waive his no trade clause. Garrett Atkins has played some outfield and if the Mets can't find a different suitor, Atkins wouldn't be bad. And Martinez might be more inclined to pitch there. Martinez will make 16 million in '08 so the Mets would probably have to take on most of his salary to proceed through trade negotiations. Also, because he only has one more year on his contract, the Mets would probably have to include a prospect or two, or take on the whole contract.