Share All sharing options for: MLB Rumors: The Brushback 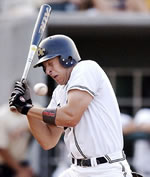 After adding the 2008 Free Agents and the Video of the Week, which features the Orioles and Red Sox fight that happened last night, I decided to add one more feature. The Brushback is my time to offer my thoughts on the league. And there is no better time to do it when trades are at a minimum, and no one is being signed or shopped around. So let me get started with the Orioles, Red Sox fight. Coco Crisp induced a balk from starter Daniel Cabrera and the very next pitch from Cabrera sailed high and tight on Dustin Pedroia. The benches ultimately cleared, but no punches were thrown. The umpires made the right decision to eject Daniel Cabrera and hopefully there is some sort of fine or suspension, I hope both. It brings me back to the point I made earlier in the year which was if a player throws at a batter in that situation, which also includes after big home run, arguing of balls and strikes, beaning of teammate in previous inning, that they should be given an automatic one game suspension. The argument to that though is if you can tell and I say about 85% of the time you can tell. The Pirates fired their GM of the past s 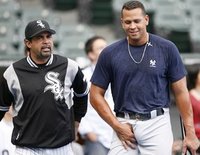 even years and are now looking for someone to step in and rebuild. However, many think that they should rebuild around prospects Andrew McCutchen, Nyjer Morgan, Tom Gorzelanny, and veteran Freddy Sanchez. They should look to trade some of their guys for solid prospects, and work their way back into division contention, like the Brewers have done. Although Alex Rodriguez loves New York City, he is making a case to make big bucks this off season. Money is no longer an issue for A-Rod and hasn't been for awhile, but the Yankee fans haven't exactly been all for A-Rod in his tenure in New York and he would make a point by walking. Torre won't influence his decision either way because he hasn't been around as long as some of the other upcoming free agents, but he will influence Mariano Rivera's and Posada's. Staying on the tune of upcoming free agents, Torii Hunter will probably be looking for a four to five year deal, worth ninety million dollars. That sounds right, the way the market is going. Especially because Ichiro 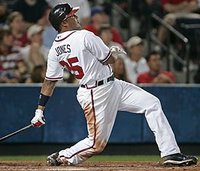 got that and he is a right fielder. Hunter is a good offensive guy in your lineup who is an amazing defensive center field, one of the best in history. The deal that many officials were talking about were a four to five year deal worth seventy five million dollars is something that might be a stretch for Andruw Jones, who is having a miserable year. He is batting just .224 with 24 HR and 84 HR and his agent still believes he can get a big time deal. I think a four year deal worth 50 million seems just about right. How can you count on a guy hitting .224? I know he might be feeling the pressure of a contract year, but you can't negotiate on stats from previous season. Teams know how to pitch to him, and Jones being an aggressive hitter, plays to teams pitching to him. Stay tuned for next weeks Brushback, and interviews with Angels pitcher John Lackey, Astros catcher J.R. Towles, and more!