Share All sharing options for: Moving Devil Rays Only Hope 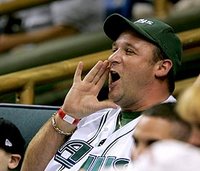 The Devil Rays have become the laughing stock of baseball, again. They have some solid players, but pitching isn't there to put something together. The city has pretty much given up too, suggesting they should move to a bigger city with fresh, new fans. They are still young, but there pitching would give a top Triple-A team a run for their money. I mean most baseball fans do not know who Carlos Pena is, because he is on the last place Devil Rays. Pena is batting .279 with 39 HR and 110 RBI, second in the league in homeruns. Many cities have openings and want a baseball team. Portland, Las Vegas, North Carolina, maybe even Mexico City, but I doubt it. Their stadium is the worst in baseball, according to several major league players, and moving them might motivate some of their young, troubled, players. I say Las Vegas because they have a temporary stadium ready, would get fans year round, and it would give more competition in the AL West. But if they want to stay in the AL East, it should be Charlotte because they double the population of Tampa, and would stay in the same division. Maybe we could bring back the Charlotte Hornets?