Share All sharing options for: Mussina Moving to Queens? 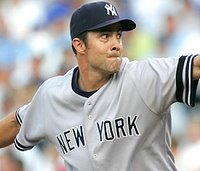 Mike Mussina, who has pitched with the Yankees since 2001, may be on his way out of the Bronx, but not out of New York. Veteran pitchers have always had success pitching in the National League because of weaker lineups, and Mussina might intrigue some teams because of it. The Mets, who will be looking to improve their pitching, will look to a veteran pitcher as a stop gap for some of their younger guys. He was 15-7 last season with a 3.51 ERA and has collected 8 wins this year, which says he is not done yet. The Mets are a younger team with good numbers up and down their lineup. They will add a new catcher next season, possibly Jorge Posada and have some young guys still improving on the field. Mussina would thrive in the National League, especially because he hasn't pitched against most of the teams being an American League pitcher his whole career.