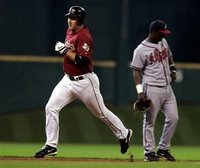 This is what you call a late edition. The Padres acquired Jason Lane from the Astros for a player to be named later and cash considerations. Lane was unlikely to be back with the Astros, and might be able to help the Padres in the final games with Milton Bradley and Mike Cameron out. Lane is batting .178 AVG this season with 8 HR and 27 RBI, but he hasn't made an error since 2005 which may give him a spot in the outfield for the final games of the season. Furthermore, since 2004, Lane has hit .280 AVG with 15 HR and 53 RBI in September versus the Giants and Brewers, who the Padres are playing in the final six games of the season. Lane won't be available for the playoffs and might not even be back with the Padres next season, but Kevin Towers must have felt that the Padres needed a veteran stop gap to hold their wild card lead. For the playoffs, they will probably put Rob Mackowiak in left field and Scott Hairston in center because Mike Cameron will is limited to pinch running for the next two weeks. The Padres could give themselves some breathing room tonight if they are able to win tonight against the Giants, but are missing two big bats in their lineup.