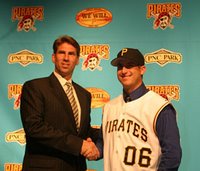 The Pirates cut ties with long standing GM Dave Littlefield, who you could argue didn't do much for the organization since 2001. There really isn't a consistent franchise player who changes a lineup, excluding Jason Bay, who is not having a great year this season. Looking back at some of his trades, the one that stands out the most in my mind would come in 2003. In 2003, the Pirates traded Aramis Ramirez and Kenny Lofton to the Cubs for Jose Hernandez, Matt Bruback, and a player to be named later. They sparked a run for the Cubs that sent them into the NLCS of the playoffs. Also, some of his draft picks over the past couple of years haven't turned out to be what expected. And the guys he passed on are doing much better. Since 2001, the Pirates have gone 477-635 missing out on the playoffs all seven times. He will be replaced by Brian Graham, the Pirates' senior director of player development, on an interim basis.