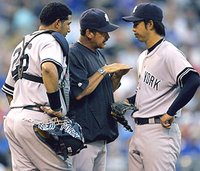 The Yankees were disappointed in their investment towards Kei Igawa, mainly because he did absolutely nothing for the Yankees. The Red Sox, who think a change of scenery and a being with two other Japanese teammates could make him more comfortable on the mound, are making it known now that they are interested. In twelve games this season, Igawa is 2-3 with a 6.79 ERA and 51 K. In Triple-A, Igawa is 5-4 with a 3.69 ERA with 71 K so the Red Sox are hoping those numbers can transform into MLB stats next season. Nothing will happen this off season because the Yankees have faith in their guys, but if he can't find the strike zone next season, they will probably shop him at the deadline.