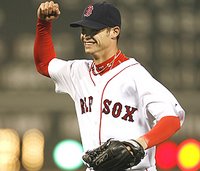 Unlike many teams, the Red Sox are playing it safe with their young pitchers, not letting them get overworked in their rookie season. Names like Mark Prior, Carl Pavano, Rich Harden, Darren Dreifort, and even Mike Hampton all come as pitchers who were over worked throughout their young careers. When rookie Clay Bucholz reported that he had shoulder fatigue, the Red Sox did not hesitate to end his season and give him a shot next season. "I'm going to get home, take a few days off and start working towards next year,'' Buchholz said. "The key is to get to spring training, get healthy and try to fight for a role in the starting rotation.'' The Red Sox do have a full bullpen and playoff ready pitchers with their hitting starting to pick up. I don't think this will hurt them in the playoffs but hopefully this is not a reoccurring problem and it won't come back to haunt the Red Sox in 2008 and beyond.