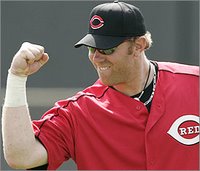 The Reds have a 13 million dollar option on outfielder Adam Dunn, and they would be dumb not to exercise it. The Reds have so much power up and down their lineup with him in it. Hatteberg, Phillips, Encarnacion, Dunn, Hamilton, Griffey, and young guys Hopper and Keppinger are starting to step up as well. However, there pitching is weak, and bullpen even worse. They are 27th in the league in ERA (4.96), they are forth in the league in homeruns given up (187), and are forth in the league in hits given up (1,525). If they were to add two more veteran relievers and a starter or two, they would definitely be a contender among the Brewers, Cubs, and Cardinals. They were just 6.5 games out a week or so ago. They are third in the league in homeruns (199), 11th in the league in RBIs (722), and tenth in the league in walks (513). They are ahead of the Cubs on all hitting stats, but only have one starter who is above five hundred in wins with at least ten starts. If they added someone like Scott Linebrink or Luis Vizcaino to their bullpen, and a starter like Eric Milton, Kyle Lohse, or both, they would make the NL Central very interesting.