Renteria Back With Leyland?

Share All sharing options for: Renteria Back With Leyland? 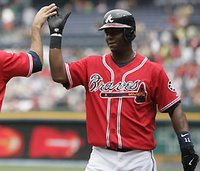 The Tigers plan on moving Carlos Guillen to first base because his knees are weak and there is a hole at first base. They tried to acquire Jack Wilson from the Pirates, but that fell through. So they are waiting out the season occasionally slotting Guillen at first while Ramon Santiago is holding his own at short. However, Guillen will only move to first if he is replaced by a Gold Glove caliber shortstop. Yunel Escobar of the Braves is ready to play everyday at short and Kelly Johnson is at second, making Renteria expendable. Renteria, who won the World Series for the Marlins in 1997 under Leyland, is still a personal favorite, and can still hit the ball. The Tigers front office are aware of what he is capable of and would be happy with him at short, but would probably have to give up a prospect or two to acquire him. The Braves will probably ask for Dallas Trahern, a young pitcher with an excellent slider to compliment his fastball, but the Tigers like to hold on to their young pitching, so they might not give him up. Clete Thomas is a young outfielder who might be major league ready in a season or two, but it would take another prospect or two to complete it, maybe Matt Rusch, but I am just speculating. I think it would be a great move for the Tigers. He would be coming to another contender, and understands Leyland's style of play. Furthermore, he can be slotted anywhere in the lineup and is guaranteed to give you 130 games. Renteria is considered a pull hitter, but has good power to the opposite field and its dimensions to right center favor him. This season, he is batting .332 with 12 HR and 55 RBI, but is batting .291 in twelve major league seasons.