Share All sharing options for: Rockies Atkins For Angels Saunders? 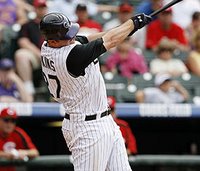 The Rockies seem to be content on trading Garrett Atkins this off season, and there is already a growing list of interested teams. The Angels, who are looking for a young third baseman to fill the hole, could trade someone like Ervin Santana. However, they way he has played in Anaheim would probably not turn into good numbers at Coors Field, even if it is in the NL. In 134.2 innings, Santana has given up 89 ER, 23 of them for homeruns. Those numbers probably would not get better at Coors Field. I feel that if the Angels were that interested they would sacrifice Saunders for a solid bat and give Santana one more chance. He did get sixteen wins last season and did well in the playoffs. Atkins is batting .285 with 21 HR and 99 RBI in 136 G this season. Other than the Angels, the Twins, Dodgers, Yankees, Red Sox, and Phillies are interested in him, and do have the prospects to bring him in. The way the Rockies have played it would make sense that the Rockies would look for a solid pitcher to back that rotation, maybe Kyle Kendrick? But he is young and seems pretty capable. Time will tell as the off season gets going what they are asking for and who is really interested.