Share All sharing options for: Rollins Wants Willis in Philadelphia 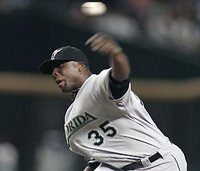 Phillies Shortstop Jimmy Rollins, childhood friend of Dontrelle Willis, is trying to recruit him to the Phillies. Dontrelle has struggled this year, but the Phillies feel he could be a force again with good hitting and solid defense. It is hard not to agree with that. The Marlins are 35/56 in save opportunities, ninth worst in the league. They are last in the league in fielding, while the Phillies are fifth. So you can probably credit some of these rough games he has had to poor fielding or inherited runs and other scenario's like that. Willis was 22-10 just two years ago but as the team has gotten worse, he has gone from 12-12 in 2006 to 8-15 with a 5.27 ERA and 128 K this season. Willis will probably be traded this off season to avoid a high salary on their payroll and the Phillies will be more than willing to offer a solid prospect or two.