Schilling As Good As Gone?

Share All sharing options for: Schilling As Good As Gone? 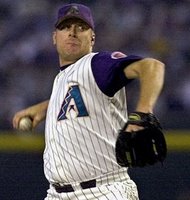 Curt Schilling, who is set to become a free agent at the end of this season, has put his Massachusetts home on the market. This could be a ploy to show the Red Sox that he is willing to leave, or he might have decided that he is ready to move on. Schilling, who represents himself, approached the Red Sox earlier this year about a contract, but they put it off til the end of the season. This season, he is 8-8 with a 3.97 ERA and 95 K and was hoping to get a one year deal, around 10-12 million dollars. I could see Schilling getting a Greg Maddux type deal. He is still a solid pitcher, who could put up good numbers with an NL Team, he is a leader in the clubhouse, and could help some of the younger guys on the team develop into better players. The Diamondbacks are looking to improve their rotation and with Livan hitting the market, it is possible we could have a homecoming in Arizona once again. He did grow up in Arizona and still has family in the area. But, if he is looking to stay closer to home in Massachusetts, he could return to Philadelphia as well. His future with the Red Sox will most likely be determined by his performance in the playoffs, assuming that they hold on to their tight lead.