Share All sharing options for: Tigers Should Still Make Move 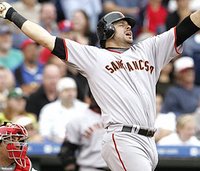 Even though the player won't be eligible for playoff rosters, the Tigers would be smart to add a bat to help their offense in the final month. They swung and missed on Ryan Klesko but trading with a team like the Giants, who are all but eliminated in the NL West, they might still be willing to work a trade. Same with the A's, who have Mike Piazza and are looking to trade him. You could even goes as far to say Sammy Sosa, who is with the struggling Rangers, would help their offense. Maybe try and snag troubled Elijah Dukes even though he has an attitude problem. A change of scenery could do him well. Ross Gload, Ryan Shealy are low risk players with high reward and would do well of the bench. It would be smart to make a move because they are five and half games out, and seem to be missing something, which could be a player like Klesko or Piazza.