What Is Clemens Worth?

Share All sharing options for: What Is Clemens Worth? 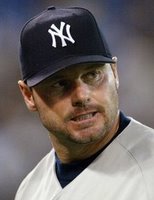 Roger Clemens' MRI revealed that he has inflammation in his right elbow and will travel to Texas for a second opinion and a cortisone shot. "It's wear and tear," Clemens said. "We're going to deal with it aggressively, as fast as possible, so I can continue on." This season, Clemens is 6-6 with a 4.45 ERA and 64 K. Clemens will make his next start in the next couple of weeks, if he is ready. But if the Yankees hold their lead, they could afford to rest Clemens and use him in the playoffs. Even though he is not pitching, he will still be working with young pitchers Joba Chamberlain, Edwar Ramirez, Phil Hughes, Ian Kennedy, and guys like Kyle Farnsworth too. Offering his expertise to these guys not only makes them more comfortable where they are playing, but will make them better as the season winds down. This will probably be Clemens' last season so he probably won't hold anything back, which will definitely help the Yankees as they push through the playoffs.