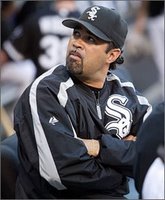 The White Sox have given Ozzie Guillen a contract extension that will keep him on the South Side until 2012. Guillen managed the Sox to a World Series in '05, but has failed to do so since then and is now one of the worst teams in baseball. He has been with them since November 2003. I am surprised by this move because it is hard not to put blame on your manager when your team has solid offensive putout. Personally, I think Guillen's staff didn't handle the pitchers well. Last season, he was out managed towards the end of the season and fell to third place and out of the division race. And this year, along with comments directed at players and the media, has not held his team together at all. It doesn't make sense why Ryan Sweeney wasn't called up, or a fresh reliever or two to take some pressure off the bullpen. Guillen really got in the faces of some of these guys and brought them down, which I think has effected the clubhouse and performance. And from what I see now, I don't seem them getting much better, especially if they plan on trading Jon Garland away.